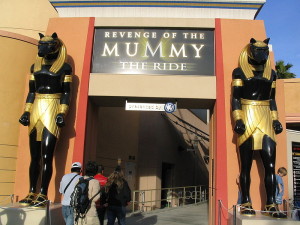 I can still remember the hullaballoo that surrounded the construction of the Revenge of the Mummy rides at Universal Studios in both Orlando and Hollywood. The ride promised to be the ultimate thrill experience – a coaster in the dark with a launch, pyrotechnics and special effects. I was thinking Rock ‘N’ Roller coaster with sheets of fire and surprises. I was wrong.

I fetched up in Orlando a full year after the ride was opened but in the September of 2005 there was still a lot of hype surrounding the ride. The rest of the park was almost deserted but there was a serious queue for the Mummy. As this ride was to be the crowning glory of my trip I braved the crowds and dutifully stood in line waiting for my big moment. Once seated I was ready for action and departed the station in good heart. Things took a turn for the worse when I was treated to the rather poor video projection of cockroaches. Surely the promised insect infestation was going to more dramatic than that? It wasn’t! The launch, such as it was, was rather underwhelming and the rest of the circuit was nothing to write home about either.

I was really disappointed by the Revenge of the Mummy and was left wondering what all the fuss was about. I infinitely preferred Kong, the attraction that the ride had replaced and didn’t bother to ride again. Indeed that was it for me and the Mummy until 2012 when I found myself in Hollywood.

Universal Studios Hollywood looked set to busy on the day of my visit and the new Transformers ride had recently opened so I arrived early and headed straight for that. Transformers is situated in the lower portion of the park which necessitates the negotiation of several escalators all of which I ran down and so arrived at the entrance to the ride a little breathless. I prayed that this one would not prove to be a disappointment but emerged from my ride with a silly cheesey grin on my face like one of the cuddly creatures in a Doug Hyde painting. There was nothing for it but to take another spin which turned out to be equally satisfying. It was then time to test out the Californian incarnation of the Mummy.

The building looked promising and the queue line was reasonably impressive so things got off to a good start but then went rapidly downhill. I had thought that this one couldn’t possibly be as bad as the one in Florida but it actually proved to be worse! My partner had not had the privilege of the Orlando experience and so had not suffered from my scepticism but disembarked saying “is that it?” Unfortunately it was!

I do believe that the Revenge of the Mummy could be the most disappointing ride I have ever experienced. There are worse coasters, obviously, but none which have been subject to so much hype. The theme had such potential and, coupled with a coaster in the dark, could have delivered the ultimate ride but turned out to be a damp squib.